House Republicans announced Thursday that they are launching an investigation that will focus on President Biden himself and any illicit or unethical financial ties he had to his son Hunter’s overseas dealings.

Now Joe Biden and his family are facing an onslaught of subpoenas from the House majority members, who say they know where the proverbial bodies are buried.

James Comer, the GOP ranking member of the House Oversight Committee, will have the power to issue legally-backed demands for documents, information and testimony once the 188th Congress begins on January 3.

The congressman laid out his plans to use that power to go after the Bidens for alleged wire fraud, tax evasion, money laundering, illegal foreign lobbying and defrauding the government.

The evidence Comer is currently combing through, and is seeking to claw via subpoena, could ultimately result in articles of impeachment for the president and prison for the First Son.

Some of the leads Comer’s investigation will pursue were first uncovered by DailyMail.com.

The incoming House oversight chief quoted a whistleblower who came forward to DailyMail.com this month claiming they were on a conference call for a Latin American online gambling company in 2012 with Joe – who was Vice President at the time – acting like ‘chairman of the board’.

In a Thursday letter demanding information from the National Archives and Records Administration, Comer referenced Hunter’s trips on Air Force 2 to Mexico in 2015 to meet with Mexican billionaires who Joe entertained at the White House and VP’s residence; a scandal revealed by DailyMail.com in June last year.

Comer also asked the FBI for information on Hunter’s assistant, JiaQi Bao, who was hired in his joint venture with Chinese oil giant CEFC, and allegedly had ties to the Chinese government.

Hunter’s close relationship with Bao, as well as her flirty emails giving Hunter political advice for Joe and telling him to embezzle company funds, were uncovered by DailyMail.com in May 2021.

Comer is also asking the Treasury for copies of more than 150 suspicious activity reports (SARs) involving the Bidens, filed by banks under anti-financial crime laws, that could be key to tracing the flows of foreign funds to the family’s coffers.

Former Treasury Special Agent and money laundering probe expert John Cassara told DailyMail.com that there was much more financial information held by banks that investigators may be able to get their hands on.

‘The 150 SARS are incredibly important but potentially there are a host of other financial intelligence reports that should also be analyzed,’ he said.

These include Reports of Foreign Bank and Financial Assets (FBARs) and financial disclosures by banks to government under the Patriot Act.

‘This kind of information sharing could be invaluable in following the money trails, unraveling associations, as well as helping to unravel the labyrinth of related LLCs and lack of beneficial ownership information,’ Cassara added.

‘The data will help investigators peel away the onion skin of a financial investigation. Depending on what is found, then relevant accounts can be subpoenaed, and a focused forensic audit conducted.’ 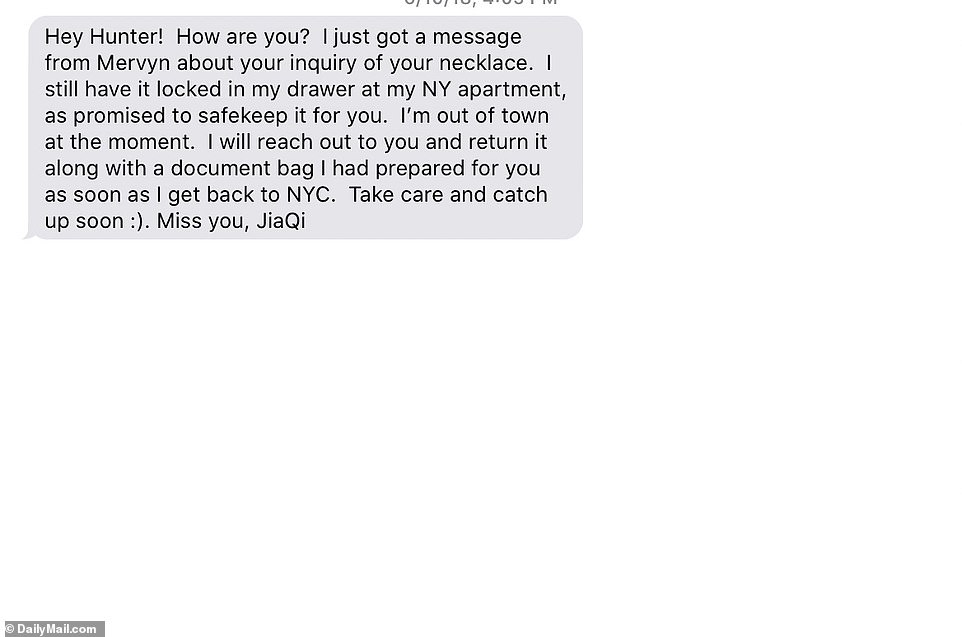 House Republicans announced Thursday they are launching an investigation into Joe and Hunter Biden a day after their party clinched the majority. Rep. Andy Biggs and Rep. Jim Jordan stand in front of a blown up email between Hunter and a woman named Cecilia with redactions.

The most compelling piece of evidence tying Joe to his son’s shady businesses is the ’10 for the big guy’ email found on Hunter’s abandoned laptop.

In 2017 when the First Son and his business partners were setting up a multi-million-dollar deal with CEFC, Hunter’s partner James Gilliar sent an email laying out the proposed ownership of their joint venture suggesting that Hunter would hold 10% on Joe’s behalf.

In the list of owners, Gilliar wrote ’10 held by H for the big guy?’

Another partner in the deal, Tony Bobulinski, confirmed that ‘the big guy’ was Joe Biden, and other emails on Hunter’s laptop refer to Joe using the same nickname.

After Hunter mentioned ‘my chairman’ in a group text with his co-investors in May 2017, Walker wrote to Bobulisnki: ‘When he said his chairmen he was talking about his dad’.

Gilliar wrote to Bobulinski in another text: ‘Don’t mention Joe being involved, it’s only when u are face to face, I know u know that but they are paranoid. 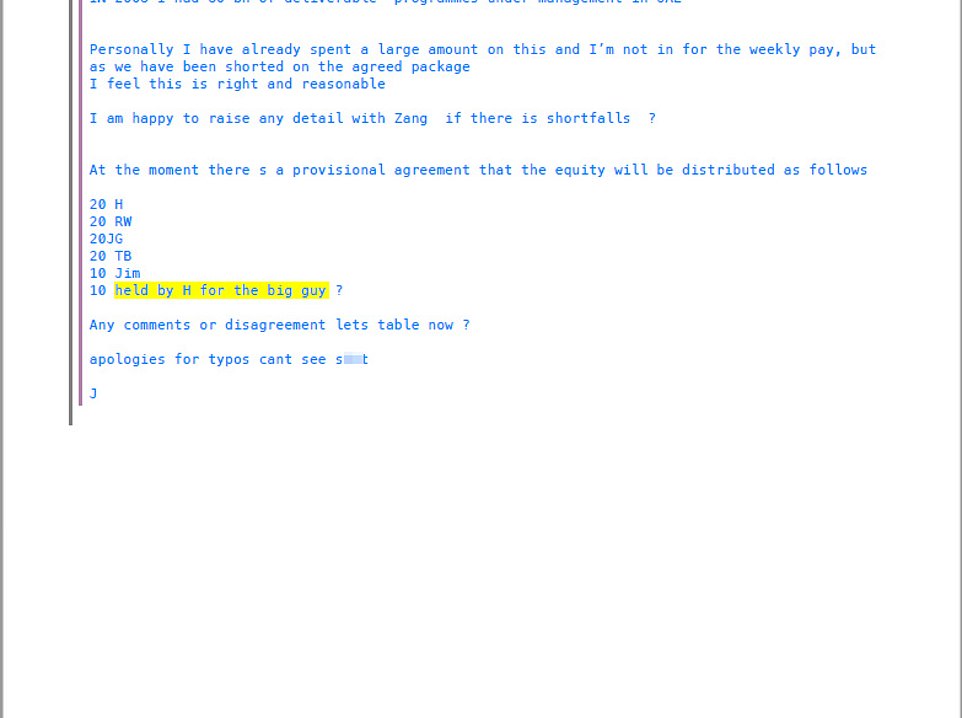 Bobulinski, who came forward in October 2020, says he met with Joe in 2017 and discussed the CEFC deal. Text messages he shared with Congress allude to the alleged meeting.

Bobulisnki confirmed that ‘the big guy’ was Joe Biden, and other emails on Hunter’s laptop refer to Joe using the same nickname.

A second whistleblower came forward to DailyMail.com this month.

The source told DailyMail.com that in 2012 they worked closely with Biden family friend Jeff Cooper on a Latin American online gambling company he ran with Hunter, Ocho Global.

The whistleblower said they were on an Ocho conference call joined by Hunter, Joe, then-Senate Majority Leader Harry Reid and his son Key Reid.

They claimed Joe was active on the alleged call asking about Ocho’s revenue projections and other details, and appeared to be acting like ‘chairman of the board’.

Cooper, who is also a longtime Biden donor, has denied Joe’s involvement.

The Shocking Voicemail and the DC Dinner

Joe has also repeatedly denied even speaking to his son about his overseas business. But DailyMail.com found a voicemail from a backup of Hunter’s phone saved on his abandoned laptop that flies in the face of his claims.

After the New York Times published a story about Hunter’s links to CEFC in 2018, Joe called his son and said: ‘I thought the article released online, it’s going to be printed tomorrow in the Times, was good. I think you’re clear.’

In another example of Joe’s links with Hunter’s foreign business partners, the then-vice president attended a dinner with Hunter’s Ukrainian, Kazakh and Russian business associates in 2015 at Cafe Milano in DC.

Hunter told one of his guests in an email that the dinner was ‘ostensibly to discuss food security’, but was in fact an opportunity to introduce his potential clients and partners to his powerful father.

The White House at first denied Joe’s attendance, then when photographs emerged of Joe there, it claimed it was only a brief stop by.

DailyMail.com has revealed that two of Hunter’s business associates discussed setting up a consultancy with Joe after he left the White House.

Cooper was even given rides on Air Force 2 and invited to the White House and VP’s residence with Hunter and their Mexican billionaire business partners Carlos Slim and Miguel Aleman, in 2014 and 2015.

In a startlingly frank email from February 2016, Hunter described an apparent quid pro quo with Aleman constituting White House access in exchange for greasing the wheels of their Mexican oil deal.

We are arriving late tonight on Air Force 2 to MX City… I’m attending meeting w/ President N[ieto of Mexico] w/ Dad. Jeff is with me on [the p]lane and we will be with us all day… I want you at the plane when the the VP lands,’ he wrote.

‘We have been talking about business deals and partnerships for 7 years. And I really appreciate you letting me stay at your resort villa…but I have brought every single person you have ever asked me to bring to the F’ing WHite House and the Vice President’s house and the inauguration.’

Joe met another of Hunter’s Chinese business partners, Jonathan Li, when he took his son on a 2013 Air Force 2 trip to China.

In total Joe met with fifteen of Hunter’s business associates according to White House visitor logs and records from the First Son’s laptop.

Emails on Hunter’s abandoned laptop published by DailyMail.com show that Hunter and Joe paid each other’s bills, and Hunter’s business partner Eric Schwerin did Joe’s taxes and visited the then-VP at the White House at least 27 times.

Inexplicably, a White House lawyer included Hunter as a recipient in her 2010 emails to Schwerin about Joe receiving an ‘audit letter’ from the IRS regarding his 2008 tax return.

Former chief White House ethics lawyer Richard Painter told DailyMail.com that the then-Counsel to the Vice President Cynthia Hogan would have reason to write to Hunter about Joe’s taxes ‘only if the son is doing business with the vice president.’

A senior advisor to the VP also copied Hunter on a May 2016 email to Joe with a schedule for his call with then-Ukrainian president Petro Poroshenko – while Hunter had a seat on the board of Burisma, a Ukrainian gas company that had been facing down criminal investigations from the country’s government.

A report by right wing transparency nonprofit Marco Polo claims copying Hunter in the VP’s schedule constitutes a use of nonpublic information from a government job for financial gain.

Joe met with at least 15 of Hunter’s business partners and associates, including the White House.

Two Chinese businessmen with ties to Hunter’s company met with VP Joe in the West Wing in July 2014, visitor records show, and followed up with the VP’s son days later with a fawning email and invitation, records reveal. The meeting was scheduled with just 24 hours notice.

A client of Hunter Biden’s company Seneca Global Advisors partnered with Wanxiang in 2012 on a $1.25billion natural gas plant in China.

The company also owned electric sports car maker Fisker, and its executive Pin Ni wrote to Hunter about his car four days after the July 25 meeting with Joe.

‘Last Friday when we visited DC, I heard that your Fisker is out of order and could not get serviced. Sorry,’ Ni wrote. ‘It would be our honor to get your Fisker fixed… I would like to give you a call to see what we could do as next step.

‘It would be our great honor to welcome you to visit Fisker or Wanxiang at any time.’

Joe also hosted Hunter’s best friend, business partner and now convicted fraudster Devon Archer at the White House just days before Archer and Hunter were appointed to the Burisma board in 2014.

Archer was entertained at the West Wing on April 16 2014 according to visitor logs. Joe traveled to Kiev five days later on April 21. The next day, Archer joined the Ukrainian gas company’s board. On April 28, British officials froze $23million in accounts belonging to Burisma owner Mykola Zlochevsky, accusing him of fraud. The following month Hunter also joined the gas firm’s board.

Photos previously published by DailyMail.com show Joe golfing in the Hamptons with Archer and Hunter in 2014.

Joe had dozens of meetings with Hunter’s consultancy partner Schwerin, Hunter’s venture partner Cooper, and met his Chinese business partner Li during a 2013 trip to Beijing. He also had a June 2014 meeting with Manuel Estrella, who partnered with Hunter on Latin American startups.

Democrat Darling Sentenced to Decade Plus in Prison

Nearly Half of this Group Have Committed S– Crimes